Our Youth for Change Program

Caring for the leaders of tomorrow

The future holds promises and dreams for the youth that can be achieved through hard work, dedication, planning, education and words of wisdom.

Young People Discover Their Collective Power Through Organizing Together

The question, carefully framed, is delivered in measured tones. Camera shutters click, news cameras roll in the background. The politician shifts briefly, eyes to his notes.

This is not, however, Capitol Hill. It’s Friday night, three days before the 2016 election, in the Labor Council building on the east side of Salinas, a working-class agricultural city of 150,000 on California’s Central Coast. The room is full, and mayoral and city council candidates are ready for questions.

Asking the question is Mariluz Tejeda, 15, of Youth for Change, a new youth group organized in Salinas by the Center for Community Advocacy (CCA). Beside her are Jennifer Rios and Azucena Barrios, both 19. A junior at Salinas High School, Tejeda has a serious demeanor and intellectual pursuits to match – math, coding, and Japanese. Her parents are immigrants from Mexico.

“I’m a youth resident leader of Acosta Plaza,” Tejeda begins, referring to the densely-populated complex of 305 condominiums on the east side of Salinas.

She then proceeds with confidence, delivering the group’s next question to the candidates about their future commitments to the community.

It’s a safe bet that six months before none of the youth conducting this political forum dreamed they’d be shaping the dialogue this way.

Nor could they have foreseen that just three months later, in part due to their efforts, a press conference would celebrate their collaboration with residents and local partners to purchase property for a local community center.

A youth program is a new venture for CCA, an institution dedicated to developing and sustaining neighborhood-based leadership in farmworker communities in California. But it is by no means a stretch. There are seven high schools in Salinas, and the median age in town is just 28.

When members of the group joined other youth and parent residents helping advocate for Acosta Plaza’s basketball court and recreation area, Hernandez knew they had started something significant. 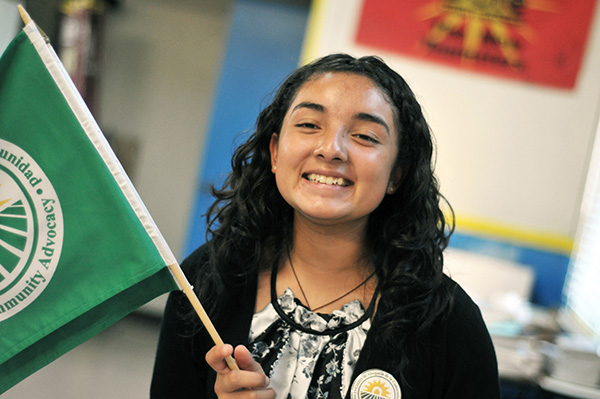 Juana Hernandez of CCA’s Youth for Change greets attendees with a smile at the group’s non-partisan candidate forum on November 4, 2016.

From the beginning, young people led the way by expressing ideas. They then took initiative, building actions and bringing their original thoughts to life.

“There were two different branches,” recalls Hernandez of their concerns. “One of them was civic engagement, and the other component was higher education . . . How do I go to university? Am I taking the right classes? Am I looking ahead five years, and knowing where I’ll be?”

Interest in how government works led to two successful campaigns by Youth for Change, both non-partisan efforts. The first of these, a voter-registration drive in a targeted East Salinas precinct, led to a ten-percent increase in that precinct’s turnout. The second, the political forum, was a real achievement in leadership for its young organizers. 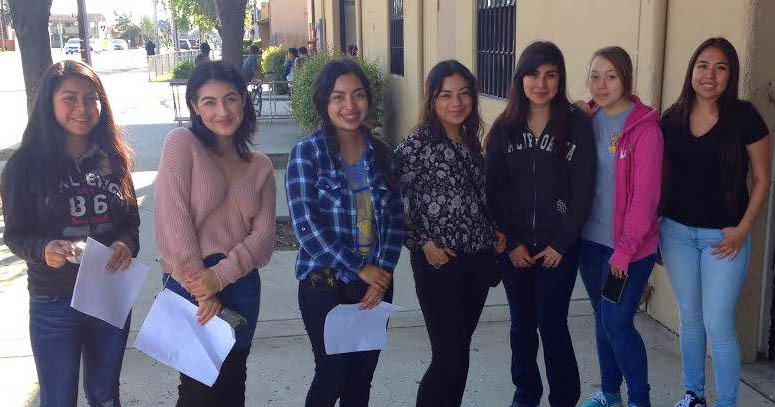 Members of Youth for Change, a program of the Center for Community Advocacy, discover their collective power by organizing together for community good.

“We started building a plan for youth leadership development. We know how to engage them, with events, [cleanups], community service, now how do we get these youth to go to a higher engagement level? How do we get them to engage in civic actions, for example, at city council meetings and other public events?” –Joel Hernandez, CCA Lead Organizer 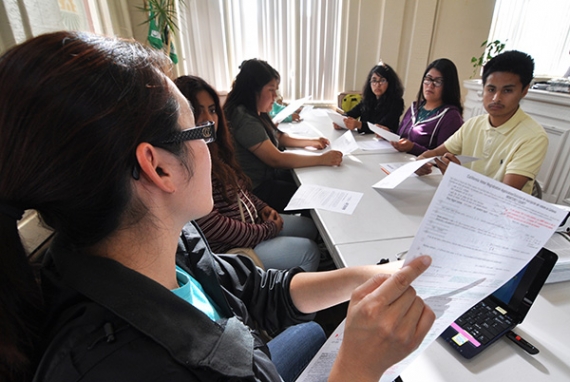 Azucena Barrios was in high school and a member of a local youth leadership group, Alvarez Youth Leaders, when she met Hernandez at Acosta Plaza. She has volunteered with CCA ever since.

“I always wanted to help people, I just didn’t know how,” says Barrios at a CCA meeting. “Being here just helps me express myself more, be a little more outgoing than usual.”

Now studying political science at Hartnell College, she is determined to become an immigration lawyer, and return to Salinas. For anyone, speaking out takes courage, so it really helps that Youth for Change feels like family.

Jennifer Rios is a youth leader who first became involved in 2014. She believes that CCA has really given her confidence: “It’s given me skills to better express my voice, and not just keep it to myself, but help create something.”

“I never knew I could speak in front of people,” says Belén Calderon, 16, a resident of Acosta Plaza. She is a new member of Youth for Change who has blossomed in the group setting.

“I really want to give back to youth, particularly in Salinas, on the east side because I’ve seen friends end badly, in the cemetery, or in jail, so I want to be there for them.” – Belén Calderon, Youth for Change Member

What’s next for Youth for Change? Keeping its members’ concerns in mind, the group is helping CCA develop a curriculum that illustrates pathways to higher education.

“These youth are interested and inspired to go to university, but they don’t know, and their parents don’t know what the pathway is,” says Hernandez. “So they are building their own pathway plan.”

In collaboration with various programs in Salinas, the idea is to construct a simple resource that any student and parent can use to plan options. Hernandez is happy with the progress the group has made in the last year.

“Part of the background work that I do is preparing them, practicing, visualizing, pushing them to their boundaries. But at the end of the day, they are the ones that developed all this.”